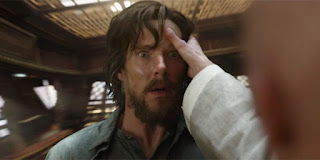 Marvel's Doctor Strange is jam-packed with spellbinding, mind-bending visual sequences, but the king of them all is what writer/director Scott Derrickson has dubbed "the Magical Mystery Tour." In it, the titular hero (played by Benedict Cumberbatch) is hurtled through the multiverse by The Ancient One (Tilda Swinton), and floats through a constant stream of both beautiful and scary alternate dimensions. It's the scene that many movie-goers will be talking about walking out of the blockbuster -- and that's definitely a good thing, given that the film's star went through hell to make it.

When the Los Angeles press day for Doctor Strange was held a couple weeks ago, I had the pleasure of sitting down with Benedict Cumberbatch, and one of the topics we discussed was the aforementioned "Magical Mystery Tour." Given that there was clearly not a lot of CGI replacement in the sequence, I was curious about how the actor went about performing the intense physicality required. The actor broke it down for me, referencing that the work was very similar to what audiences saw in a particular 2013 Best Picture-nominee. Said Cumberbatch,


A lot of it was done in a Gravity rig, because his context is everything. His body is snapping and changing and multiplying, and just as myself it was bending, and being thrown around, and tumbling forward and backward and sideways, and all sorts of things. Respect to Sandra Bullock for pulling that off in Gravity! And in a spacesuit as well.

If having your body tossed around in every direction by a giant mechanical rig doesn't sound like fun, then you've hit the nail on the head as far as Benedict Cumberbatch's thoughts on the experience go. He certainly didn't think it was fun, but as he went on to explain, he is incredibly thankful for all of the crewmembers who guided him through the process and made sure that it was entirely safe. Said the actor,


It is one of the most uncomfortable things you could ever do in life, but at the same time really thrilling, and once you've learned to manage your core strength, it's the same as any other wire-work in the film - of which there was a lot. You just have to get into the mid-air aerobatics and gymnastics right, but I had the best people teaching me, and showing me, and test driving it. So I was very well looked-after, like you always are.