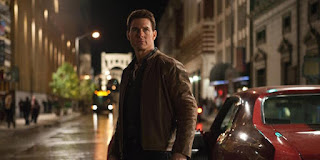 For over 30 years in Hollywood, one of the ways Tom Cruise has made a name for himself is as an action star. From the Mission: Impossible movies to the recent Jack Reacher: Never Go Back, the man has proven he knows how to fake-kill bad guys and even pull off legitimately crazy stunts like strapping himself to the side of a plane. Oh, and he isn't showing any signs of stopping. He's now attached to a new action thriller which is inspired by the Biblical character Methuselah. Seriously!

Similar to the movie's namesake, Methuselah will see Tom Cruise playing a protagonist who has lived for nearly 1,000 years and barely aged. Over time, he's picked up a lot of survival skills that have kept him a step above the rest. Deadline also reports that Pirates of the Caribbean: Dead Men Tell No Tales co-director Joachim Rønning will helm Methuselah. Deadfall writer Zach Dean penned the most recent version of the script, but now that Rønning, Warner Bros will reportedly "go out to a number of other writers" for rewrites before coming back to Cruise. David Heyman will produce the project.

Just like the Methuselah from the Bible, Tom Cruise's character in this upcoming movie has been walking the Earth for almost a millennia, which makes him perfectly suited for battling bad guys. How can normal goons match a man who's lived through centuries of conflict and learned a variety of ways to neutralize an opponent? However, the mention of survival skills seems to indicate that although Cruise's Methuselah character ages slowly, he may not heal quickly from injuries, like Wolverine. If that's the case, then we're all the more impressed he's managed to live this long without someone punching his ticket, though you have to wonder whether he's considered suicide at any point during his lengthy lifetime.

Ageless protagonists are nothing new in the sci-fi/fantasy/superhero genres, but for Tom Cruise, this will undoubtedly be an interesting challenge. Not only will he have to show off the usual fighting moves and gun play all too common in action movies, but he'll also have to convincingly show the weariness of a man who has been around almost 1,000 years; someone who has outlived everyone he has ever knew or loved. When this character isn't kicking ass, we need to see him struggling with the pain of having to live with what he probably now sees as a curse.

Within the last few years, nearly all of Tom Cruise's appearances have been action oriented, like Edge of Tomorrow and Mission: Impossible -- Rogue Nation. His other upcoming movies include American Made and The Mummy, but if made effectively, Methuselah could be one of the more unique entries on his resume.

No release date has been set for Methuselah yet, but we'll keep you apprised on how this project is developing as more news comes in.