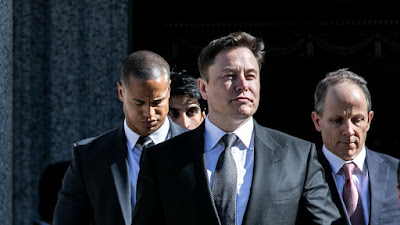 The US financial markets regulator has resolved its row with Tesla chief executive Elon Musk over his use of Twitter.
The Securities and Exchange Commission (SEC) accused Mr Musk of breaching a court order to not share information which could impact the financial markets, without pre-approval.
Earlier this month a judge ordered the SEC, Tesla and Mr Musk to come to an agreement, rather than sending the matter through the courts.
That agreement, made public today by the SEC, adds greater clarity to the restrictions on Mr Musk’s communications, on Twitter or elsewhere.
It states that Mr Musk may not, without approval of Tesla’s legal team, share information about:
Neither Mr Musk, nor Tesla, has yet commented on the agreement.

Mr Musk found himself the subject of the SEC’s ire after tweeting, last August, that he planned to make Tesla a private company and that he had the “funding secured” to do so.
That message - later characterised as being a joke - ended up being extremely costly.
US authorities ordered Tesla and Mr Musk to each pay a $20m (£15.2m) fine and forced Mr Musk to relinquish his role as chairman for three years.
Mr Musk and Tesla also agreed to implement new oversight on the 47-year-old’s Twitter habit.
However, in February he tweeted that Tesla would make “make around 500k” cars in 2019. The SEC argued that this constituted a previously undisclosed projection in breach of the agreement.
Mr Musk later added a clarification, and argued that the numbers were already public. He then said: "Something is broken with SEC oversight."
It was not the first time Mr Musk has displayed his disapproval of the regulator.
"I want to be clear,” he told CBS 60 Minutes in December. "I do not respect the SEC."
News of the latest settlement saw Tesla’s stock rise modestly in after-hours trading on Friday. However, the price has dropped sharply this week due to Tesla posting worse-than-expected earnings on Thursday.
Share on Facebook
Share on Twitter
Share on Google+
Share on LinkedIn