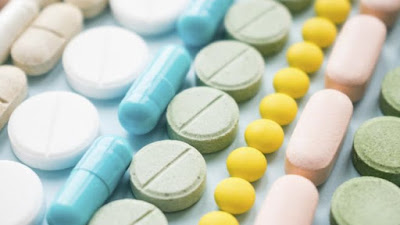 All opioid medicines will carry prominent warnings on their labels stating they can cause addiction, the health secretary has announced.
Matt Hancock acted after figures in England and Wales revealed a-more-than 60% increase in prescriptions for opioid painkillers in the last decade.
People needed protection "from the darker side to painkillers," he said.
Health experts welcomed the move, saying opioids can cause "life-altering and sometimes fatal addictions".
Opioids, such as morphine or fentanyl, are derived from opium and can be highly effective for managing severe or chronic pain but they can also be highly addictive.
The number of prescriptions issued for these sorts of medicines has risen dramatically from more than 14 million in 2008 to 23 million last year.
There are also some opioids available over the counter, such as codeine-based painkillers, which are weaker in strength but can also cause addiction.
From 2008 to 2018, the number of codeine-related deaths in England and Wales has more than doubled.

What are they used for?

Why are they dangerous?

Mr Hancock said: "I have been incredibly concerned by the recent increase in people addicted to opioid drugs.
"Painkillers were a major breakthrough in modern medicine and are hugely important to help people manage pain alongside their busy lives but they must be treated with caution.
"We know that too much of any painkiller can damage your health, and some opioids are highly addictive and can ruin lives like an illegal drug.
"Things are not as bad here as in America, but we must act now to protect people from the darker side to painkillers."

"It feels like you've got thousands of insects inside your skin"

I was prescribed painkillers for chronic back and neck pain after an accident in February 2014 but the pain didn't go away.
I was taking codeine four to five times a day, tramadol as a top-up once a day, as well as naproxen and co-dydramol four or five times a day.
Opioids affect your mental capacity, you feel dizzy, you can't concentrate and it's hard for you to do your job.
Within two years the medication caused a gastric tear and my haemoglobin levels dropped from a healthy 12 to a dangerous 5.6.
I went on a three-week hospital pain management programme in October 2016 and they helped wean me off the meds and rely on other methods of pain control.
I had all the symptoms, albeit to a lesser extent, of a drug addict doing the same.
It feels like you've got thousands of insects inside your skin. You can't find any comfort, you can't sleep and your bowel movements are shot to pieces.
Professor Dame Sally Davies, the Chief Medical Officer for England, has welcomed the government action.
She said: "We know that long-term use of painkillers can lead to life-altering and sometimes fatal addictions, so I am delighted to see measures put in place to raise awareness of the risks of codeine and prescribed drugs.
"It is vital that anyone who is prescribed strong painkillers takes them only as long as they are suffering from serious pain.
"As soon as the pain starts to alleviate, the drugs have done their job, and it is important to switch to over-the-counter medication like paracetamol which do not carry the same risk of addiction that comes with long term use."
Public Health England is already undertaking a review into prescription medication addiction and is due to report its findings this year.
Under Mr Hancock's plan, the Medicines and Healthcare products Regulatory Agency (MHRA) will have the power to enforce warnings on opioids packaging, following recommendations from the UK's Commission on Human Medicines (CHM) Opioid expert working group.
Dr June Raine, director of the MHRA's vigilance and risk management of medicines division, said: "This is an important first step to help minimise the risks of addiction associated with opioid medicines, while supporting patients to get the right information at the right time to support their care."
Share on Facebook
Share on Twitter
Share on Google+
Share on LinkedIn