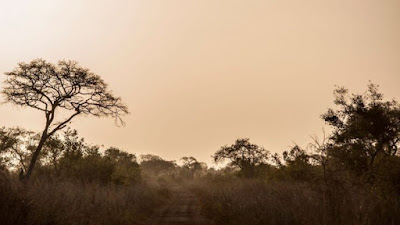 A body has been found in the search for two French tourists and their local guide who disappeared last week while on safari in north-western Benin.
Sources cited in multiple reports say the body was that of the guide, but there has been no official confirmation.
The group disappeared in Pendjari National Park on Wednesday.
The park is on the border with Burkina Faso where Islamist militants have been increasingly active in recent months.
The three were last seen driving a rented Ford SUV in the park, which is some 550km (335 miles) north of Benin's capital, Porto Novo.
Beninese and French authorities are investigating the incident.
In a statement shared on social media (in French), Benin's Ministry of Interior said a body was discovered on Saturday but had not yet been identified.
A local official and regional security source told the Reuters news agency that the body belonged to the local guide.
They said the guide was found shot dead, while the car was discovered burned in eastern Burkina Faso.
The fate of the two French tourists remains unclear, they added.

France 24 cited unnamed regional sources making the same claims about the body and car. The sources also said that the two French tourists had been kidnapped.
The BBC has tried to contact Benin's government and African Parks, a non-profit conservation organisation which manages Pendjari National Park, for comment.
The French government has previously warned citizens against travelling to parts of north-west Benin near the Burkina Faso border because of the risk of kidnapping.
However, the case of the missing tourists is rare for the country, which is considered a pocket of calm in West Africa.
Pendjari National Park is described by African Parks as the largest remaining intact ecosystem in West Africa and the last refuge for the region's largest population of elephants.
Share on Facebook
Share on Twitter
Share on Google+
Share on LinkedIn

0 Response to "Body Found In Hunt For Benin Tourist"