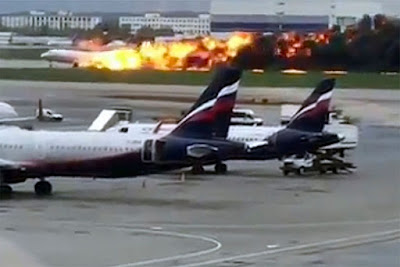 A Russian passenger plane has made an emergency landing at a Moscow airport after a fire broke out on board.
Videos on social media show passengers using emergency exit slides to escape and run away from the burning Aeroflot aircraft.
The Tass news agency said at least one person died but an official toll is yet to be released.
At least five others are said to have been injured, with the plane reportedly carrying 78 people.
It remains unclear what caused the large blaze and emergency landing.
The aircraft is reportedly a Sukhoi Superjet-100, and was scheduled to depart at 17:50 local time (14:50 GMT) for the city of Murmansk.
The Interfax news agency reports the crew issued a distress signal shortly after departure from Moscow's Sheremetyevo airport.
Reports also suggest it did not succeed in its first emergency landing attempt.
Data from tracking website Flightradar24 appears to confirm reports the emergency landing happened about 30 minutes after take-off.
Kristian Kostov, a former Bulgarian Eurovision contestant, has posted on social media about witnessing the incident.
He said people at the airport were left "shaking" after seeing the aircraft engulfed by fire and said other flights are now unable to take-off.
Share on Facebook
Share on Twitter
Share on Google+
Share on LinkedIn