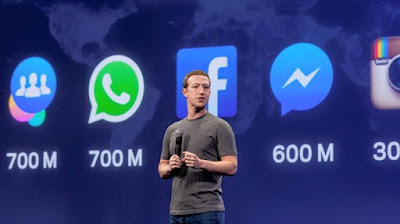 Facebook boss Mark Zuckerberg has revealed a series of changes to the firm's portfolio of social platforms, including Instagram and Whatsapp.
The new designs and features for its apps are a direct response to widespread criticism of how the firm protects user data.
Mr Zuckerberg said the firm intends to put privacy first.
He acknowledged that there was much to do to rebuild trust.
In a speech to developers, Mr Zuckerberg described the firm's new focus on privacy as "a major shift" in how the company is run.
Some of the more visible changes to those who use the firm's products will include:
Messages sent via Messenger will be end-to-end encrypted by default, meaning Facebook itself won't see the contents, and the platform will be fully integrated with WhatsApp

"The future is private," he said - adding, in a nod to the tech giant's stream of privacy scandals, "I know we don't have the strongest reputation on privacy right now, to put it lightly".
Mr Zuckerberg said Facebook was focused on looking at ways to encode privacy across the firm's entire infrastructure.
"It's not going to happen overnight and to be clear we don't have all the answers," he said.
He has previously said that he believes that people will want to talk privately in small groups and communities in the future.
However he will have to convince the public that Facebook is the place to do this, some commentators said.
Skip Twitter post by @sheeraf