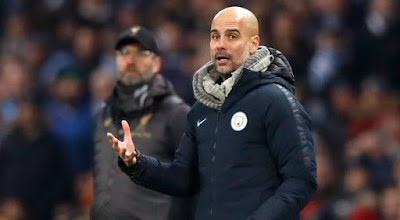 Manchester City boss Pep Guardiola says that the Premier League "is the toughest league" to compete in as he bids to win back-to-back titles.
Guardiola has won multiple league titles in Spain and Germany as a manager and will add a second Premier League title if City beat Leicester on Monday and Brighton next Sunday.
"For the quality from rivals, no doubts it's the toughest," he said.
"That's why being there [top] is incredible."
City and Liverpool have been locked in an incredible title fight all season, with both sides already amassing more points than 13-time winners Manchester United ever have in a 38-game Premier League season.
City won the league with 100 points last season, but before this campaign Liverpool's highest points-haul was 86, when they were runners-up in 2009.

Whoever finishes second this season will have the most points of any runner-up in the Premier League era.
Race to the title
Points total after each PL match

"Only one will take the prize and the other one will be at home sad," said Guardiola, who said that winning this season would be one of his biggest achievements.
"Arriving at this stage, two games left with 92 points, after 100 points last season, that is the most satisfaction I've had as a manager. It's not easy, honestly, and the players did it again.
"I would not say that 100 points was bad and that we are not satisfied with what we did last season but, at the same time, we were seven points behind (earlier this season).
"You give credit for the titles and how huge our rival is. In my career as a manager, I played against incredible sides and there are two that were 'wow'.
"One is the Barcelona of Luis Enrique with Neymar, (Lionel) Messi and (Luis) Suarez in front. The other is this Liverpool. I think they're the best two sides I've faced as a manager."
Should City drop points against Leicester, Liverpool could win their first league title in 29 years against Wolves next Sunday.
Share on Facebook
Share on Twitter
Share on Google+
Share on LinkedIn

0 Response to "Guardiola Says: Premier League Is The "Toughest" Competition"