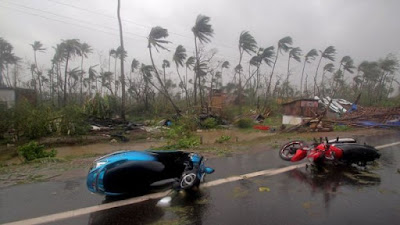 A powerful cyclone has slammed into India's eastern coastline, bringing torrential rains and winds of up to 200 km/h (125mph).
Cyclone Fani, one of the most severe storms to hit the region in recent years, made landfall at 08:00 local time (02:30 GMT) on Friday.
More than one million people have been evacuated from the eastern state of Orissa, also called Odisha.
A state official said two people had been killed.
Flooding has also been reported in several areas, and forecasters say a storm surge of 1.5m (5ft) could threaten low-lying homes.
The cyclone made landfall in the tourist town of Puri, which is home to the 858-year-old Jagannath temple.
It is expected to hit 15 districts in Orissa, one of India's poorest states, before weakening on Saturday.
India's Prime Minister, Narendra Modi said $140m (£106m) was being allocated for emergency relief.
Numerous flights and train services in and out of the state have been cancelled, while schools and government offices are shut. Operations at three ports on India's eastern coast have also been shut down.
Naval warships and helicopters are on standby with medical teams and relief materials. The country's National Disaster Response Force (NDRF) has also deployed several teams there.
India's National Disaster Management Authority has warned people along the east coast, especially fishermen, not to go out to sea because the conditions are "phenomenal".
The agency said the "total destruction of thatched houses" was possible, as well as "extensive damage" to other structures.
"I can confirm two deaths for now," Orissa special relief commissioner Bishnupada Sethi told AFP news agency.
"[A] man in one of the shelters died because of a heart attack. Another person went out in the storm despite our warnings and died because a tree fell on him," he said.
The cyclone is expected to move towards Chittagong in Bangladesh in a weaker form on Saturday.
It coincides with high tides in the country, which may exacerbate potential flooding issues there. 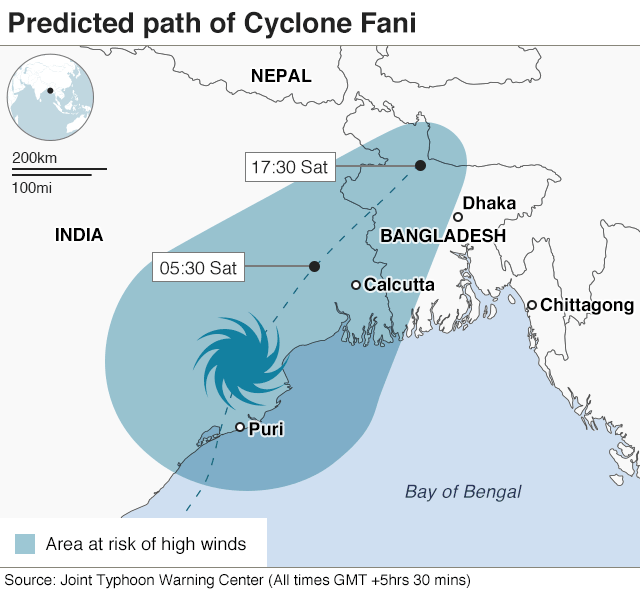 The port city of Cox's Bazar, where hundreds of thousands of Rohingya refugees live in camps with minimal shelter, is also on alert. But the cyclone is currently not expected to hit the camps unless it changes path, which is not thought likely.
In February the International Federation of Red Cross and Red Crescent Societies (IFRC) began distributing tarpaulins ahead of the region's "cyclone season" - but warned that if a deadly storm rolls in, shelters made of battered bamboo and shredded plastic would offer little protection.
The navy, the coast guard and the National Disaster Response Force have all been prepared for deployment.
Two ships with divers and doctors have been stationed at the southern port cities of Vishakapatnam and Chennai (formerly Madras), an official told local media.
In 2017, Cyclone Ockhi killed more than 200 people and displaced hundreds. In October last year, officials in Orissa evacuated hundreds of thousands of people when another cyclone struck.
But India has improved its protections and responses to these disasters in recent years. The state's most deadly cyclone on record took place in 1999, killing almost 10,000 people. 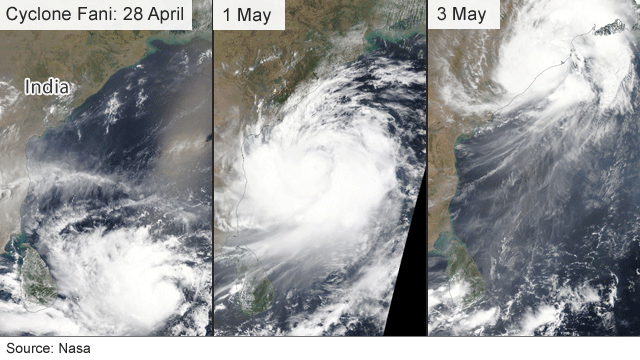