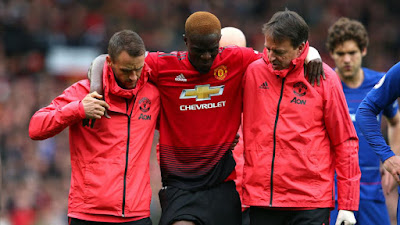 Manchester United defender Eric Bailly will miss the final two games of the season and this summer's Africa Cup of Nations after sustaining a knee injury in Sunday's 1-1 draw with Chelsea.
The Ivory Coast international, 25, injured his medial ligament in a collision with Chelsea midfielder Mateo Kovacic during the second half.
Bailly was starting his first Premier League game since 3 February.
The Africa Cup of Nations is from 21 June to 19 July in Egypt.
Ivory Coast are one of the favourites for the tournament and have been drawn in a group that also contains Morocco, South Africa and Namibia.

0 Response to "Manchester United Defender Bailly Out Of Afcon"