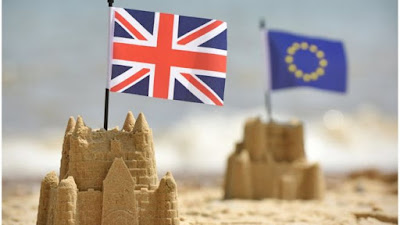 The government has signed a round of new Brexit contracts with outside consultants worth almost £160m.
Many of them are due to run until April 2020, six months after the UK's new scheduled departure date from the European Union.
Since the EU referendum, Whitehall has hired companies to carry out consultancy work to prepare for Brexit.
The government said it would continue to "draw on the expert advice" of a range of specialists.
In February, an analysis for the BBC found the government had agreed contracts worth £104m for outside help on Brexit.
At the time, Dave Penman, the general secretary of the FDA, the professional association for civil servants, called the sum "eye watering".
He also said it was "no surprise following almost a decade of austerity that has seen the civil service shrink by almost a quarter".
The Cabinet Office has now published a new round of contracts with consultants.
These could be worth up to a further £159m, according to the data provider Tussell.
Nine companies that were awarded contracts last year - including Deloitte and Ernst & Young - have had those extended by a year.
Another 11 firms, including smaller suppliers, have been given brand new contracts.

Redacted documents published by the government state they're being paid between £3m and £6m each for IT, accounting and auditing work and management services, all related to Brexit.
Tamzen Isacsson from the Management Consultancies Association says companies are supporting the government at a critical time.
"What they have brought to the government at this unprecedented period of huge workload is capacity, insight and skills.
"This has enabled the government to set up and plan new systems to cope with a whole range of changes from border control to trade, border policy, immigration and other areas."
A Cabinet Office spokesman said: "As a responsible government we have, and will continue to, draw on the expert advice of a range of specialists to deliver a successful and orderly exit from the EU."
Share on Facebook
Share on Twitter
Share on Google+
Share on LinkedIn