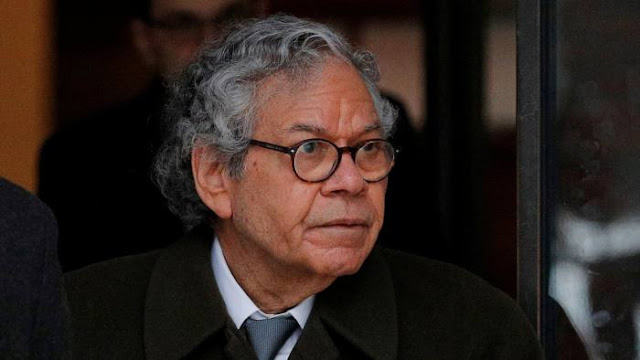 The founder of Insys Therapeutics John Kapoor has become the first pharmaceutical boss to be convicted in a case linked to the US opioid crisis.
A Boston jury found Kapoor and four colleagues conspired to bribe doctors to prescribe addictive painkillers, often to patients who didn't need them.
The former billionaire was found guilty of racketeering conspiracy for his role in a scheme which also misled insurers.
Tens of thousands of deaths have been caused by opioid overdoses in the US.
Indian-born Kapoor founded drugmaker Insys Therapeutics in 1990 and built it into a multi-billion dollar company.
The jury found Kapoor had also misled medical insurance companies about patients' need for the painkillers in order to boost sales of the firm's fentanyl spray, Subsys.
The court heard that Kapoor - who was arrested in 2017 on the same day President Donald Trump declared the opioid crisis a "national emergency" - ran a scheme that paid bribes to doctors to speak at fake marketing events to promote Subsys.
During the 10-week trial, jurors were also shown a rap video made by Insys for its employees on ways to boost sales of Subsys.
Kapoor and his co-defendants - Michael Gurry, Richard Simon, Sunrise Lee and Joseph Rowan - face up to 20 years in prison.
A statement from Kapoor's lawyer said he was "disappointed" with the verdict. The men had denied the charges and have indicated that they plan to appeal.
Forbes listed Kapoor's net worth as $1.8bn (£1.4bn) in 2018, before dropping off the publication's billionaire rankings this year.
His conviction marks a victory for US government efforts to target companies seen to have accelerated the opioid crisis.
The US Centres for Disease Control and Prevention has said that opioids - a class of drug which includes everything from heroin to legal painkillers - were involved in almost 48,000 deaths in 2017.
The epidemic started with legally prescribed painkillers, including Percocet and OxyContin. It intensified as these were diverted to the black market.
There has also been a sharp rise in the use of illegal opioids including heroin, while many street drugs are laced with powerful opioids such as Fentanyl, increasing the risk of an overdose.
Share on Facebook
Share on Twitter
Share on Google+
Share on LinkedIn

0 Response to "Pharma boss convicted in US opioid case"