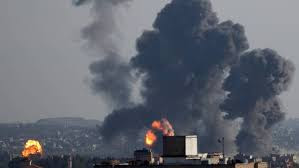 Israel and militants in the Gaza Strip have stepped up their attacks on each other, in some of the most intense exchanges of recent years.
The army says Palestinian militants have fired 600 rockets into Israeli territory over the weekend. Many were intercepted but three Israelis died.
Israel says it has hit 260 targets in the Gaza Strip and threatened further "massive" strikes.
At least 15 people have died so far in Gaza, the Health Ministry there says.
On Sunday, Israeli Prime Minister Benjamin Netanyahu said he had ordered the military to "continue its massive strikes on terror elements in the Gaza Strip".
Israeli forces around Gaza would be "stepped up with tank, artillery and infantry forces", he added.
The flare-up comes despite a truce agreed last month. Egypt and the United Nations have recently been trying to broker a longer-term ceasefire.

How did the latest round of violence develop?

It began on Friday, during protests in Gaza against the blockade of the area - which Israel says is needed to stop weapons reaching militants.
A Palestinian gunman shot and wounded two Israeli soldiers at the boundary fence. Israel retaliated with an air strike that killed two militants.
The rocket barrage from Gaza began on Saturday morning. Israel's Iron Dome missile defence system shot down dozens of the rockets, but a number of homes in Israeli towns and villages were hit.

What do we know about casualties?

Barzilai Hospital in Ashkelon, 10km (six miles) north of Gaza, has said it has treated more than 100 civilians in the last 24 hours.
Out of those, three people died and three more were seriously wounded - including an elderly Israeli woman.
Those killed included a 58-year-old man struck in a garden, Israeli media say.
Israel air strikes targeted sites belonging to the militant groups Hamas and Islamic Jihad on Saturday and Sunday.
On Sunday, the Israeli military said they had killed a Hamas commander named Hamed Hamdan al-Khodari in one of their strikes.
Gaza's Health Ministry say the 15 killed there include two pregnant women and an infant.
Israel has contested the account of the death of one woman and her 14-month-old niece killed on Saturday. They blamed their deaths on a Palestinian rocket that fell short of its target.
The sites destroyed include a multi-storey building in Gaza City, which Israel said included Hamas intelligence offices.
Turkey said its state news agency Anadolu had an office there. Foreign Minister Mevlut Cavusoglu called Israeli strikes on civilians "a crime against humanity".

How does the surge in violence compare?

It is the one of the most serious flares up in violence since the conflict of July and August 2014.
In that year, Israel launched a ground offensive on Gaza following the kidnapping and killing of three Israeli teenagers.
The conflict resulted in the death of 67 Israeli soldiers. Hamas and its allies launched more than 4,500 rocket strikes that killed six civilians in Israel.
On the Palestinian side, 2,251 people, including 1,462 civilians, were killed in the seven-week conflict, according to the UN.
Since then, Palestinian militants have continued to carry out sporadic strikes on Israel.

In a previous wave this year, in March, several rockets were fired into southern Israel, triggering raids on Gaza by the Israeli air force. No fatalities were reported on either side.
In early April a ceasefire was brokered by Egypt, but Hamas and allied militant groups later accused Israel of violating its terms.

What has the reaction been?

Nickolay Mladenov, the UN Special Coordinator for the Middle East Peace Process, has condemned the recent violence and said the UN is working with both sides to calm the violence.
Skip Twitter post by @nmladenov

End of Twitter post by @nmladenov
Speaking on Fox News on Sunday, US Secretary of State Mike Pompeo said Israelis have "every right to defend themselves" from rocket attacks.
"I hope we can return to the ceasefire that had been in place for weeks and had been holding significantly before this," he added..
The European Union on Sunday called for rocket fire to "stop immediately".
Iran's foreign minister, condemned what he labelled as Israel's "savage" attacks on Gaza, while also hitting out at "unlimited American support" of Israel.
Save the Children has said it has had to suspend all but essential programs in the Gaza strip.
Jeremy Stoner, their Middle East Regional Director, said the group were "deeply alarmed" by rapidly rising casualties on both sides, and called for de-escalation.
Share on Facebook
Share on Twitter
Share on Google+
Share on LinkedIn