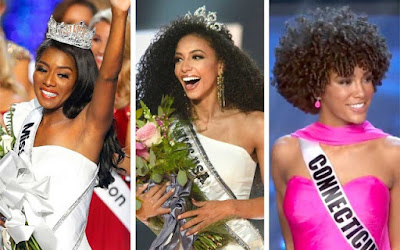 In a historic first, the 2019 winners of America's three biggest beauty pageants are all black women.
Nia Franklin, 25, became Miss America in September, followed last week by Kaliegh Garris, 18, as Miss Teen USA and Cheslie Kryst, 28, as Miss USA.
The wins are particularly meaningful given the competitions' decades-long history of racism and bias.
Vanessa Williams was the first black woman to win a top pageant in 1983.
After Ms Williams was crowned Miss America, it took until 1990 for another black woman to win a major pageant.
"Mine is the first generation to have that forward-looking mindset that has inclusivity, diversity, strength and empowered women," Ms Kryst said in her acceptance speech on Thursday.

End of Instagram post by missusa
Ms Kryst is a civil litigation lawyer from North Carolina who also works pro-bono to reduce unfair sentences for prisoners. She will now represent the US in the Miss Universe pageant.
The reigning Miss America, Ms Franklin, is an opera singer who also works with the Sing for Hope charity to promote accessibility of the arts and social change.
Teen winner Ms Garris and Ms Kryst have both also been praised for opting to wear their natural hair in the pageants.


2020 presidential hopeful Senator Kamala Harris, whose father is Jamaican, shared her support on Instagram, saying: "What a tremendous moment for these young, successful women making their own path, on their own terms."

Miss America, the oldest of the top three pageants, was created in 1921. Miss USA began in 1950 and Miss Teen USA in 1983.
Until the 1940s, Miss America barred women not of "the white race" from participating. Despite later changes to the rules, a black woman did not participate in Miss America until 1970.
In 1968, black women held the first Miss Black America pageant to protest racist standards.
More recently, in the wake of the #MeToo movement, these pageants have continued to change, with many contestants pushing for diversity and women's empowerment over beauty alone.
Share on Facebook
Share on Twitter
Share on Google+
Share on LinkedIn

0 Response to "Top US Pageant Winners All Black Women"